Katsushika Hokusai (1760-1849) was a Japanese painter and printmaker from the Edo period. He had been working as a woodcarver's assistant since he was fourteen. Vincent van Gogh was a great admirer of his woodcut "The Great Wave of Kanagawa".

Who was Katsushika Hokusai?

Katsushika Hokusai (1760-1849) was a Japanese painter and picture maker from the Edo period and he was the son of a mirror maker (his father made mirrors for the shogun). He worked from the age of fourteen as an assistant to a woodcarver. Hokusai operated under more than 30 names, including Shunrō, Tawaraya Sōri, Gakyo Rōjin Manji.

He made drawings and prints of landscapes, kabuki actors and fantastic erotica called shunga. His most famous work is the series of woodcuts 'Thirty-six faces on Mount Fuji', a series that responded to the rising desire to travel in his own country. "These waves are claws, the boat is caught in them, and you feel it. Hokusai makes you scream ... only he does it with lines." Vincent van Gogh wrote this to his brother Theo on 8 September 1888 about a print of Hokusai he admired. Van Gogh means the woodcut: The Great Gulf of Kanagawa.

His work "The Great Gulf of Kanagawa" dates from around 1831

The work has a horizontal format and measures 25 by 37 centimetres. He shows a swaying sea with three small boats and a huge wave with Mount Fuji in the morning sun in the background. The depiction is a maritime yin and yang, made up of circles and rectangles, graceful in line and with a sparse palette: blue for the water, yellow for the boats, grey and orange for the sky. He is a piglet in and outside Japan.

The turbulent water intrigued Hokusai. On older woodcuts he tried to catch the most flying of subjects. It wasn't easy for him. The canals he brought down on sailors are a kind of granite water rocks, the foam on top makes them recognizable as waves. By looking in Nagasaki at the Japanese painter Shiba Kokan, an artist inspired by Dutch marine painters such as Hendrick Vroom and Willem van der Velde, and by refining his technique, he learned to make waves that came across as liquid. 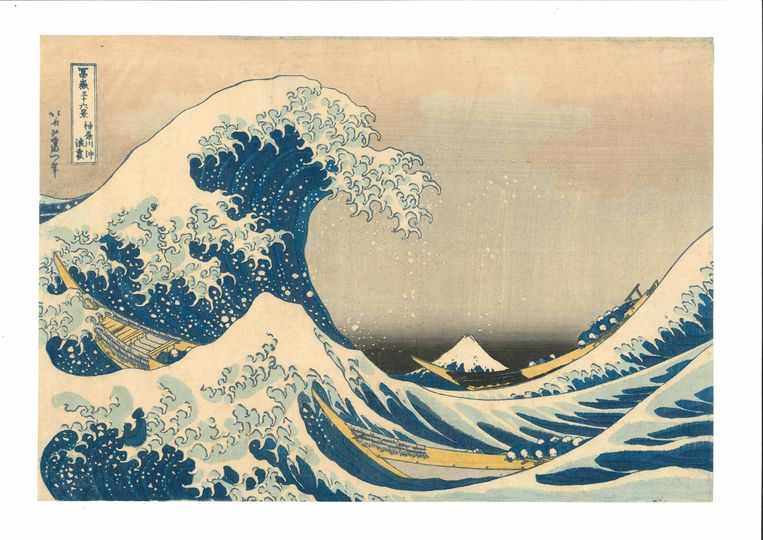