Ulrich Barnickel is considered one of the most independent metal sculptors in Germany. Characteristic of his work are large figures created from flat elements by forging, molding and further processing steps, whose bodies consist of a crumpled metal skin. 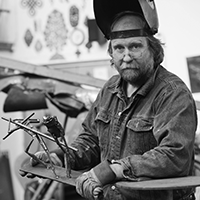 They are sculptures that show the outside and the inside at the same time, as it were, and often mythological figures that the artist places in a general human context. Barnickel's artistic path began at the famous Burg Giebichenstein near Halle, where he trained as a metal sculptor. In 1984, he was expatriated by the GDR authorities.

However, he has always held his Giebichenstein heritage and the value of his training in high esteem, and in 2007 he received his doctorate from Weimar's Bauhaus University with a thesis on "Metallers at the Burg - from applied metal art to steel sculpture."